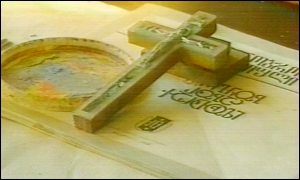 Bible will weigh over 100kg

A team of artists, linguists, theologians and priests is creating the world's largest bible - in ancient Georgian.

The bible is being hand-painted by a group of Georgian artists led by Rusudan Petviashvili, whose childhood drawings were described by Picasso as works of genius.

The team has been working on the bible for 10 years. They have been joined by a group of bible scholars and calligraphers. The team expect to finish the painting and binding in a few months.

The Gospels are written on parchment in ancient Georgian, and the illustrations have been executed in special non-toxic paints.

The television said the artists are treating their work on the book as a spiritual exercise and have turned down all commissions which do not have a biblical theme.

"We just work. We don't get paid anything. We simply work to save our souls and to bring joy to our people and clergy," calligraphy expert Rafael Gogitdze told the television

When it is finished the bible will be moved to a special vault.

It will only be brought out during special services by three specially chosen churchmen.

"One person would not be able to cope with the honourable duty," the television said.